Users of Facebook Messenger can send messages and exchange photos, stickers, audio, and files, as well as react to other users’ messages, interact with bots, and conduct voice or video calls.

Download the Facebook Messenger application from Google Play or the App Store, use the web-based version by visiting Messenger.com, or use Messenger within Facebook itself on your computer or mobile device. Follow the directions Messenger provides to get started. Because Messenger is compatible with iOS and Android, it also works with the Apple iWatch and Android-based watches.

Read also: How To Create A Facebook Back Up

Navigate to Messenger.com, and click on or search for the user you’d like to chat with.  Begin typing your message in the designated chat box. Below are some helpful guides in using Messenger:

Via the mobile app

The Messenger application varies from the browser version in that the home screen displays contacts and a list of your most recent message threads as opposed to opening to the message itself. Along the bottom of the screen are two icons:

Then called “Facebook Chat”, the messaging platform  was released to users as a feature within Facebook in April 2008. In November 2010, Facebook revamped their messaging platform and acquired group messaging service Beluga a few months later. This update and acquisition led to Facebook launching standalone iOS and Android mobile apps in August 2011 rebranded as Facebook Messenger.

In April 2014, Facebook announced that the messaging feature would be removed from the main Facebook app. Users would consequently need to download the separate Messenger app.

One year later, the company released a website interface for Messenger.

In October 2016, Facebook released Messenger Lite, a stripped-down version of the messaging tool with a reduced feature set. The Lite version was primarily designed for older Android phones and regions where high-speed internet was not widely available. By 2017, Lite was expanded to over 130 countries.

In May 2017, Facebook updates Messenger to include a new home screen with tabs and categorizations of content and interactive media. By the end of 2019, Messenger was the second most downloaded mobile app of the decade.

In April 2021, Facebook released Messenger Rooms, a video chat feature that allows users to chat with up to 50 other users at a time. A few months later in July, App Lock, a feature that allows users to use Face ID or Touch ID to lock their chats, was released. This feature was created in an attempt to improve privacy and security concerns regarding Facebook’s data collection policies. 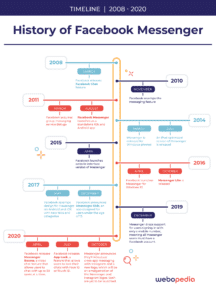 At its core, Messenger is an instant messaging communication app for both one-on-one and group messaging. Users can send messages to other users without the requirement of being Facebook friends as long as the user has the phone number of the other user in their contact list.

Users can use a video chat room and share the chat room link to connect with other users. Depending on the settings, participants won’t need to download, log into, or connect with the host on Messenger in order to join the call.

Messenger supports emojis and animated images instead of text such as ????. Emojis can also be used to react to messages, such as with a heart, thumbs up, or laughing emojis.

Users can choose from different themes and colors to make chats more custom.

Reply to specific messages within group or individual conversations to enhance message flow.

Users can opt in to using their device’s face or fingerprint ID to unlock Messenger.

Facebook has a bot platform for Messenger and an API to build chat bots to interact with users. Bots can participate in group chats by injecting notifications such as news or sports updates. Users can also scan specifically branded QR codes through Messenger’s camera functionality that take the user directly to a specific bot.

Dark mode changes the background color of Messenger from black to white, lowers brightness while maintaining contrast and vibrancy, and cuts down the glare from a mobile device.

Messenger users can send encrypted messages to one another. Messages are encrypted using the Signal Protocol. Users can also send self destructing messages, meaning that are permanently erased following a specified time period.

In March 2020, total messaging traffic increased by 50 percent due to the COVID-19 outbreak. For example, group calls grew more than 1,000 percent in Italy during the height of quarantine in March 2020.

While Messenger remains popular, users continue to express data and privacy concerns since Facebook’s Cambridge Analytica scandal, where raw data was collected from over 87 million Facebook profiles. Below are possible alternatives.

WhatsApp is a free, multi-platform messaging app that allows users to send text messages and make video and voice calls with a Wi-Fi connection. It syncs with a mobile device’s contacts and is ideal for international calling, as calls can be placed worldwide without fees or charges.

Yes, the app is owned by Facebook, but it does offer features that Messenger doesn’t have, such as end-to-end encryption.

Standout feature: WhatsApp is available for both mobile and desktop, so you can sync all of your conversations to whichever device is most convenient.

Brief is a productivity app that combines chats, tasks, projects, file sharing, video conferencing, and storage. It’s best for business use, such as communicating with colleagues, clients, and partners. The chat and task manager tool integrates with video conferencing app Zoom, so it also supports video calls.

Standout feature: Brief allows users to create and collaborate on tasks and projects alongside using its messaging capabilities.

Telegram is a free, cross-platform, cloud-based instant messaging software. Users can share videos, images, or files with other users and participate in a group with up to 200,000 participants. The app is security focused with chats, groups, and media being encrypted with 256-bit symmetric encryption, 2048-bit RSA encryption, and Diffie-Hellman secure key exchange. Like Messenger, users can also create messages that self-destruct after a set period of time.

Standout feature: Telegram features secret chats that use end-to-end encryption, leaves no trace on their servers, and don’t allow for forwarding. Secret chats are not part of the Telegram cloud, so messages can only be accessed on the device of origin.

Viber is a cross-platform messaging app that lets users send text messages and make voice and video calls with end-to-end encryption. Create group chats with up to 250 people and make group calls with up to 20 people at a time. Setup requires a phone number, so users don’t have to create a password. Similar to WhatsApp, voice and video calls are free worldwide with Wi-Fi.

Standout feature: Viber features a Community feature—a group of up to 1 billion users that can be used for any purpose, such as a hobby group, fan club, or a professional circle.

Signal Private Messenger is a free, securely encrypted messaging app that’s a 501c3 nonprofit. Features include individual and group messaging, sticks, photos, file transfers, and voice and video calls. Group chats can have up to 1,000 people and group calls can have up to eight. Users sign up with their phone number and can connect their contacts to Signal.

Standout feature: Signal allows users to block others from taking screenshots of a chat and supports Touch ID to lock chats.