Emoji refers to small pictures used on smartphones, tablets, and other electronic devices to convey emotion or represent an object or symbol more succinctly than a text statement.

Emoji are an evolution of the text-based, picture-like emoticons that users created and included in e-mails and early text messages. While emoticons are created by users from text, emoji are standardized picture characters that are built into mobile and PC operating systems for use in text messaging, posts on Facebook and other social networking sites, conversations in Skype and other messaging apps, and more.

Emoji are incorporated into Unicode, and are supported on Apple iOS mobile devices, Apple Mac OS X PCs (as of OS X Lion), Android devices, Windows 8 and Windows 10 computers and more. The Unicode Consortium recently introduced the Unicode 9 standard, which adds 72 Emoji characters, bringing the total number of Unicode-supported Emoji to more than 1800. 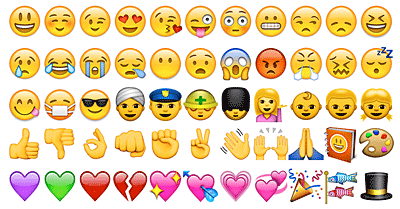 History and Evolution of Emoticons to Emoji

Scott Fahlman is credited with using the first emoticon 🙂 back in 1982, and emoticons are still used today in e-mail and text messages, although emoji have largely supplanted them on mobile devices and mobile apps.

Emoji were first introduced in the late 1990s by DoCoMo i-mode, a mobile internet service provider in Japan, and have since been adopted by most mobile carriers, mobile devices and PC operating system manufacturers.

Unicode began incorporating Emoji into its standards in 2010, but it wasn’t until Apple included an Emoji keyboard as part of the 2011 iOS 5 release for the Apple iPhone that the popularity of Emoji really started to skyrocket.