What is a Smiley Face?

Recommended Reading: Looking for the Huge List of Texting and Online Chat Abbreviations?

Scroll through the smiley face and emoticon article or jump to a specific topic of interest using the quick links below.

Why Do People Use a Smiley Face?

In the same way that a person’s voice or facial expression changes when having a conversation, a smiley face is used to achieve the same result in text-based chats. These simple symbols tells people that you are smiling, laughing, upset or not very happy with the conversation that is currently taking place in text.

If you were joking with someone and sent a text message saying “get a life” the person receiving the message might think you are being rude with your comment. If you send the same message with a happy smiley face symbol : ) the person would take that to mean you were smiling when you sent the message and know you were joking with them. In a face-to-face communication you would laugh or really smile to convey the “I’m joking around or kidding with you” emotion. A sad face usually indicates you are sad or upset. People might also send a sad face text message if they don’t agree with something you wrote.

How to Create a Smiley

To create a text smiley face you use standard characters and punctuation marks in sequences that look like human facial expressions. Smiley face text are all sideways. Here are some basics to get you started with understanding what different characters used in smiley faces mean:

The First Smiley Face: History of the Symbol

The idea and first use of a text smiley face is credited to Scott Elliott Fahlman, a computer scientist at Carnegie Mellon University. He thought using smile and frown text symbols would help message board users distinguish between serious posts and jokes. The message detailing the use of the smiley emoticons was posted in September, 1982. In this article, Smiley Lore 🙂, Fahlman describes why he felt there was a need to mark posts that contributors did not intend to be taken seriously by others reading the message board:

“This problem caused some of us to suggest (only half seriously) that maybe it would be a good idea to explicitly mark posts that were not to be taken seriously. After all, when using text-based online communication, we lack the body language or tone-of-voice cues that convey this information when we talk in person or on the phone. Various “joke markers” were suggested, and in the midst of that discussion it occurred to me that the character sequence 🙂 would be an elegant solution one that could be handled by the ASCII-based computer terminals of the day.”

Text Smiley Faces and Their Meaning

Over time the basic smiley face was adapted to suit a whole range of emotions, and people started creating different symbols to represent ideas and feelings: For example, you could text a rose to your friends @-}—.

Here are few examples of different smiley faces and their meanings. Remember, each smiley face or symbol is sideways.

Some chat and instant message programs will automatically translate text smiley faces into graphical emoticons. The word emoticon is defined as a pictorial representation of a facial expression. Many smartphones and online chat apps, like Facebook chat and AOL Instant messenger (AIM) offer this feature. For example, if you type out the characters to make a “happy face” followed by “sad face” followed by “cool sunglasses” you would enter the following characters:

Emoji are small pictures used on smartphones, tablets, and other electronic devices to convey emotion or represent an object or symbol more succinctly than a text statement. Emojis are basically an evolution of the text-based emoticons. In Facebook chat, for example, typing the characters for a smiley face will automatically convert the text smiley to a small image. Facebook also offers a click menu in chat windows where you can select from a number of different smiley face images to use in your chat window. 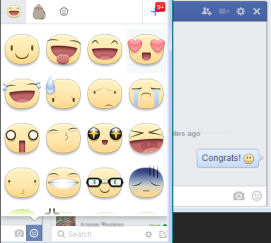 Many mobile phone and tablet apps will also convert the text smiley to a graphical emoticon. On Android phones, for examples, different applications will display emoticons using the green Android (robot) face. You can download emoticon apps for your Android device directly from Google Play.

This article was last updated on November 02, 2017