What happens between the time that the user powers up the computer and when the icons appear on the desktop?

In order for a computer to successfully boot, its BIOS, operating system and hardware components must all be working properly; failure of any one of these three elements will likely result in a failed boot sequence. 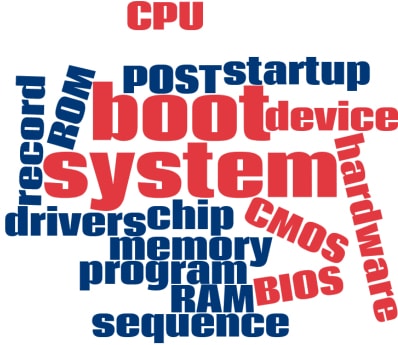 When the computer’s power is first turned on, the CPU initializes itself, which is triggered by a series of clock ticks generated by the system clock. Part of the CPU’s initialization is to look to the system’s ROM BIOS for its first instruction in the startup program. The ROM BIOS stores the first instruction, which is the instruction to run the power-on self test (POST), in a predetermined memory address.

POST begins by checking the BIOS chip and then tests CMOS RAM. If the POST does not detect a battery failure, it then continues to initialize the CPU, checking the inventoried hardware devices (such as the video card), secondary storage devices, such as hard drives, ports and other hardware devices, such as the keyboard and mouse, to ensure they are functioning properly.

Once the POST has determined that all components are functioning properly and the CPU has successfully initialized, the BIOS looks for an operating system to load.

The BIOS typically looks to the CMOS chip to tell it where to find the OS, and in most PCs, the OS loads from the C drive on the hard or solid state drive, even though the BIOS has the capability to load the OS from a floppy disk, CD or other storage device. The order of drives that the CMOS looks to in order to locate the OS is called the boot sequence, which can be changed by altering the CMOS setup. Looking to the appropriate boot drive, the BIOS will first encounter the boot record, which tells it where to find the beginning of the OS and the subsequent program file that will initialize the OS.

Once the OS initializes, the BIOS copies its files into memory and the OS basically takes over control of the boot process. Now in control, the OS performs another inventory of the system’s memory and memory availability (which the BIOS already checked) and loads the device drivers that it needs to control the peripheral devices, such as a printer, scanner, optical drive, mouse and keyboard.

This is the final stage in the boot process, after which the user can access the system’s applications to perform tasks.

How to Split Screen...

A split screen view on a laptop or desktop computer is...
Read more
Insights

How to Reboot Your...

If your Mac computer is behaving strangely, it may be time...
Read more
Insights