Throughput is the rate data is processed and transferred from one location to another. In networking, it’s used to measure the performance—meaning speed—of hard drives and RAM along with internet and network connections.

Also read: What is Bandwidth?

WIthin networking, throughput was originally conceived to evaluate the productivity of computer processors. This was calculated in terms of batch jobs, or millions of instructions per second.

Throughput measures how many packets arrive at their destination successfully. How fast packets or units of data travel from source to destination or from sender to recipient determines how much information can be sent within a given timeframe.

For example, if a packet with a size of 100 bytes takes one second to flow from Computer A to Computer B, the throughput between the two devices is 800 bps. One byte is equal to eight bits, so 100 bytes is 800 bits, resulting in a calculation of 800 bits per second.

How to optimize throughput

In order to optimize throughput, one must minimize network latency. The higher your network delay and latency, the longer it will take a data packet to reach the appropriate destination, resulting in jittery, lagging services.

There are four main causes that affect network latency times:

Aside from latency, there are other factors that affect the throughput of a network:

To reduce latency and optimize throughput, follow these six tips.

Browsers will cache certain resources of a website locally in order to improve latency times and decrease the number of requests back to the server.

If you haven’t turned your network hardware off for an extended period of time, it could be causing lag. Unplug your router and modem, then reboot the system.

Using a CDN will bring resources closer to the user by caching them in multiple locations globally. Once those resources are cached, a user’s request only needs to travel to the closest location to retrieve data instead of going back to the origin server.

All network connections have limited bandwidth, so if you’re using the maximum amount, latency will increase. Close down those applications if you’re not actively using them.

5. Use a wired connection

Wireless connections increase the chance packets will get lost because they’re sent through the air. When this happens, a server has to send the information again, causing a delay. Using an Ethernet or fiber optic cable is a cheap and efficient way to improve your connection and speed.

Sometimes latency is caused by faulty hardware. Try working without certain equipment to see how it affects network speed. By process of elimination, you can pinpoint the exact piece of hardware causing the issue.

Maximum throughput is different from bandwidth, which is the maximum transfer throughput capacity of a network. Bandwidth measures how much data can be sent and received at one time. While throughput and bandwidth appear to be the same on the surface, there are differences that set them apart. 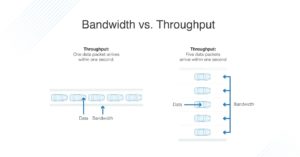 Bandwidth doesn’t increase the speed of a network, it only appears to make the network faster. If you increase a network’s bandwidth, you’re essentially increasing the amount of data that can be sent at one time, not increasing the transmission speed. Bandwidth doesn’t change the speed at which packets travel, and having substantial bandwidth won’t matter if throughput is being dragged down by latency, jitter, or packet loss.

So what is bandwidth used for? One of the most important things bandwidth is used for is providing information. Monitoring bandwidth availability gives administrators visibility into if they have an adequate amount of bandwidth to fit the needs of their applications.

A company’s throughput depends on how well the company manages their supply chain, meaning the interaction between the company and its suppliers. If suppliers aren’t able to contribute to the input of production, the disruption has a negative impact on throughput.

A supply chain can calculate throughput—the time it takes to fully process a product or service—using this formula:

An example of throughput

XYZ Corp. manufactures toothbrushes. The company’s leadership wants to increase profits by improving the operations process. In order to do that, the company needs to calculate their current throughput.

XYZ Corp currently holds 1,000 toothbrushes in inventory. The average time a toothbrush is in the production process is 2 days. So in order to find the throughput, we use Rate = Inventory / Time.

There is a wide variety of network traffic monitoring tools and bandwidth monitors on the market. Some offer robust and comprehensive services, while others are more lean and only offer the basics. Some are free and open source, while others are expensive. We’ve outlined the best tools for monitoring and managing bandwidth and throughput on your network.

The Network Bandwidth Analyzer Pack (BAP) from SolarWinds is an advanced bandwidth analyzer with the ability to detect, diagnose, and resolve network performance issues that might be causing low throughput. When your network is running slower than normal, BAP works to find the users or applications that are consuming the most bandwidth.

IxChariot, a product of Keysight, is a comprehensive performance monitoring and analysis software aimed at enterprise networks. The software uses throughput as one of the primary data points for testing and gathering information and also keeps track of packet loss, jitter and delay. Users can run the performance endpoints on a variety of environments all from a central platform, be it a PC, mobile device, or virtual machine.

ExtraHop is an enterprise-level monitoring tool with features such as contextual intelligence, forensic investigation, and real-time analytics. Users can automatically detect and correlate network issues and get detailed charts covering bandwidth usage, average throughput, and throughput by protocol.

Iperf is a free, open source tool that takes active measurements of throughput on a network. This solution uses a client/server configuration, meaning the software needs to be installed on both endpoints in order to measure the throughput. It has cross-platform compatibility, giving it extended usability on MacOS and FreeBSD.

The Comparitech Speed Test is a web-based application that will check current download speed, upload speed, adn ping response times. It’s a quick, free way to check the throughput from a given computer or mobile device and provides an unbiased look at the bandwidth available. This tool doesn’t have in-depth monitoring features, but each test run donates one cent to charity.