Android 8.0 Oreo arrived on August 17th, 2017, and an Oreo 8.1 update started rolling out on Google Android devices later that year in December.

Android Oreo also includes the usual interface and layout design improvements, including a revamped settings screen and 50 redesigned emojis to go along with support for the entire catalog of emoji in the Emoji 5.0 Unicode standard. 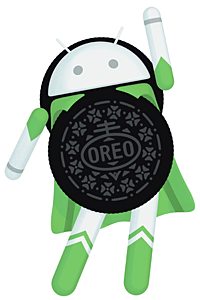 The Oreo 8.1 Update added a helpful feature that provides users with the speed of public Wi-Fi spots to quickly tell which ones offer a fast (or slow) connection.