Nougat is the official Android codename for the 7.0 update of the open source Android mobile operating system. Nougat started rolling out to select Android mobile smartphones in September 2016 as the successor to the “Marshmallow” Android 6.0 release, with Android One and Nexus 6 and later devices first on the list to receive the new mobile OS update.

Android 7 Nougat adds key new features such as Split Screen for true multitasking, a Doze on the Go feature to conserve battery power when a user in on the move, 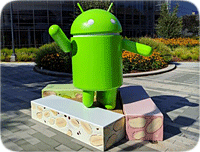 enhancements to notifications in the form of Notification Direct Reply and Bundled Notifications, new security features like Direct Boot and file-based encryption, a Data Saver mode, the ability to customize Quick Settings and more.

Google also developed Android Nougat with performance in mind, particularly in the area of graphics. The company introduced a Virtual Reality mode as well as Vulkan API technology in Nougat to give game developers control over the GPU in order to maximize gaming capabilities on Nougat devices.