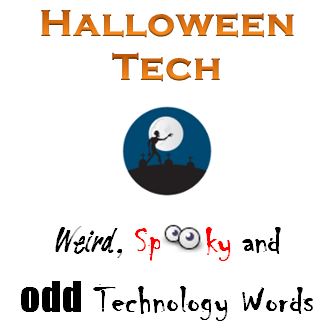 In our never-ending quest to gather terms and information for Webopedia’s growing database of computer, Internet and technology definitions, we’ve stumbled across a number of acronyms and tech terms that strike us as being odd, weird or just plain spooky!

Some acronyms are better off classified as tongue-twisters, while other terms are words we use in every day language and it isn’t clear as to why the word was chosen to represent an aspect of technology (BLOB, for example).

To celebrate Halloween tech-style, we’re bringing you a fun but totally legit list of some of the spookiest acronyms and tech term oddities we’ve come across while compiling the Webopedia database. Who knows, maybe one of the following tech terms will spawn a costume idea that will bring first place at this year’s office (IT) Halloween party.

Seriously, we didn’t make these up…

In the tech world BLOB is not used to describe a green oozing spatter of who-knows-what. It’s actually the abbreviation for binary large object, a collection of binary data stored as a single entity in a database management system.

If you’ve ever seen a picture of a blowfish then I am sure you too are wondering why in 1993 Bruce Schneier decided to call his symmetric encryption algorithm Blowfish. We still don’t have the answer to that one.

One can’t help but to picture an irate system administrator trying to choke their router. While we think this should be used in reference anger management seminars for network administrators, unfortunately the term choke packet is already taken and being used to describe a specialized packet that is used for flow control along a network.

Is nematic even a word? If it is, then what is it, and how does one super twist it? We could ask Sharp Electronics to explain this LCD technology (which is seen more commonly in its abbreviated form, CSTN).

Not only is the term itself odd but so is the definition in the case of a Cuckoo Egg. For those who download copy protected songs, one day you may come across Cuckoo Egg yourself. As you sit back to enjoy the tune, within the first 30 seconds you may hear something other than the initial song; usually cuckoo clock sound effects or a series of random sounds and noises that are free of any copyright ownerships. Cuckoo on you for not buying the CD in the first place!

We all know what Google is, but why would you want to whack it around? Let’s face it, even techie folk need a break every now and then and GoogleWhacking is a fun way to take a few minutes out of your wired day to play. The goal of a Googlewhack is to perform search queries that will produce only one single search result in the Google search engine. Imagine if it catches on in a big way we just might end up with a whole new Internet sporting event.

We all know that drinking copious amounts of coffee and staying up into the wee hours of the morning fixing a computer problem or playing shoot ’em up games can cause one to have the jitters. While that is somewhat of a workable term definition, jitter buffers (and jitter filters) in tech terminology refer to a hardware device or software process that eliminates jitter caused by transmission delays in an Internet telephony (VoIP) network. We also have jitter busters, which is a device that aims to suppress jitters. It brings the age old saying of “having the jitters” whole new meaning.

Now this is just plain scary! Short for malicious online advertising, malvertising is typically performed by masking malicious computer code with seemingly harmless online advertisements. The advertisements may lead to harmful or deceptive content or may directly infect a victim’s computer with malicious software (malware) that can damage data, steal personal information or even bring the user’s computer under the control of a remote operator.

Any child will tell you they are cute, blue and only three apples high, but a system administrator might cower at the mere mention of the word. In tech jatrgon, smurf is a very nasty thing! It’s a type of denial of service attack where a network connected to the Internet is swamped with replies to ICMP echo (PING) requests.

While a tarball may sound like a road paving job gone bad, a tarball is an archive of files created with the Unix tar utility. While tarballs have been around since the mid 1980’s, the actual term tarball did not become commonplace until the late ’90s. I wonder if that has anything to do with UNIX admins not wanting to have to say that term out loud in the office?

While visions of past editors and people scouring Web sites just waiting for the chance to e-mail a Webmaster a “typo” note comes to mind, the definition of typosquatting is somewhat expected. Typosquatting alludes to individuals or companies who purchased a domain name that is a variation on a popular domain name with the expectation that the site will get traffic off of the original site because of a user’s misspelling of the name. For example, registering the domain names webapedia.com or yahooo.com in the hopes that someone making a typo will get to that site unexpectedly.

While visions of wild, unpredictable, possibly unstable and menacing animals may dance through your head, a Wolfpack is also the codename used for Microsoft’s clustering solution interesting comparison don’t you think? Wolfpack was released in September, 1997 as part of Windows NT 4.0, enterprise Edition. Its official name is Microsoft Cluster Server (MSCS).

While some think the term zombie is in reference to one of the many 3D PC games out there, a zombie is actually a bit more serious than that. In the world of UNIX, a zombie refers to a “child” program that was started by a “parent” program but then abandoned by the parent. Zombie is also used to describe a computer that has been implanted with a daemon that puts it under the control of a malicious hacker without the knowledge of the computer owner. No matter what definition you choose for the word zombie, it is still pretty scary stuff!