Surround Sound is the term commonly used to describe a system in which the sound output appears to surround the listener that is, the technology gives the impression that sounds are coming from all possible directions. 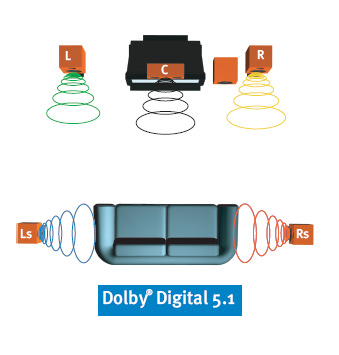 Surround sound is a way to provide a more realistic and engaging experience. Sitting in front of your television or playing a computer game with basic $10 stereospeakers plugged in will provide you with sound. You hear the music, voices and other sounds coming to you from straight ahead. Using a surround sound system, however, you’ll hear variances in the sound and and it will be presented to you from different directions. For example, the car driving off screen will sound like it is coming from the left. While playing a 3D shooter game, the rocket gun blasts sound as if they are being shot from overhead or grenades sound like they are exploding at ground level.

All technical aspects aside, surround sound works because multiple audio channels are received through speakers that are positioned at various locations in the room. This is programmed into the source and the sound tracks are decoded when the source is played. While this may seem simplistic, it is important to remember that sound systems started out with monophonic sound, a single channel system. In monophonic (mono) sound systems, the signal sent to the sound system is encoded as one single stream of sound and the sound is usually received through a single speaker.

Advancements led to stereophonic sound (stereo) where the sound was split between two channels, left and right. Stereo sound enabled listeners to hear some ambiance of the production for example, a recording of a live concert in stereo where you begin to hear playback from extraneous noises at the performance. Surround sound takes it a step further by producing a live-quality effect. If you’re at an actual concert, you hear sound from behind you, and listening to a recording in surround can produce the effect of this noise coming from behind you, or to the right, or even from above and moving down.

Surround sound adds realism and a new field of depth to your listening experience. This is accomplished not only because you have more speakers for output, but because the sound recording itself contains more audio channels.

At the heart of every home theater is an audio/video receiver (A/V). Using a DVD movie as an example, the audio is encoded when the DVD is produced by packing multiple audio channels into a compressed format for storage. When you play the DVD movie, your DVD player or A/V receiver (commonly called a a home theater receiver) decodes the encoding scheme (i.e. Dolby Pro Logic II for example). Decoding capabilities of an A/V receiver are built in. Most A/V receivers today can decode Dolby Digital and Digital Theater Sound (DTS), while higher-end receivers may also include DTS-ES or THX Surround. Today’s A/V receivers allow you to control the video source and other video options, but for sound you’ll need it to route the sound from different sources (TV, DVD, VHS), control bass, treble, and volume. You can amplify signals to the speakers, and modern A/V receivers also handle the all-important surround sound decoding.

Both Dolby Digital and DTS are 5.1 channel formats. 5.1 surround sound is a multichannel sound technology that produces five channels of sound in the left, right, center, left-surround and right-surround positions. These five channels are the minimum required to produce 5.1 surround sound. The .1 represents the channel for LFE (low frequency effects), which is usually sent to a subwoofer. 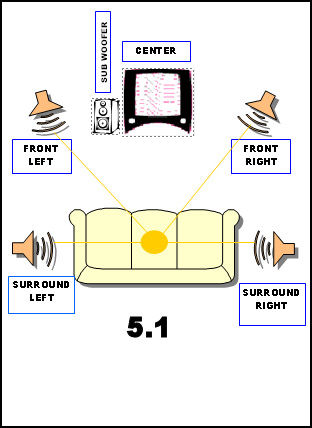 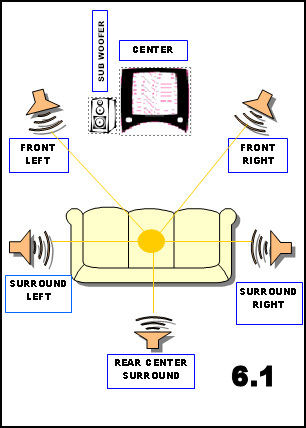 Moving forward, we now also have 7.1 surround sound, which splits the single rear-center speaker into individual left- and right-rear surround. These systems are not a true discrete 7.1 channel system as 7.1 formats don’t currently exist. In a true discrete 6.1 surround system, the back center surround position is separate from the surround left and surround right positions. A 7.1 channel system uses matrixed extended surround where the left-back and right-back (rear-center surround) multichannel are blended together and stored. 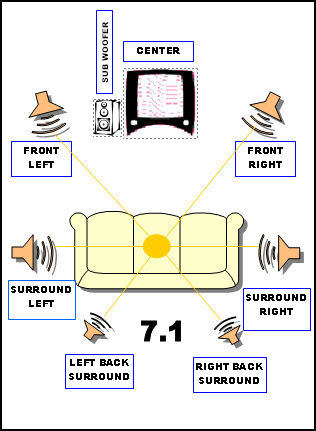 Developed by THX, the name itself, 10.2 is an obvious marketing play on 5.1 (10.2 is twice as good as 5.1). In a 10.2 surround sound 14 channels are used. This includes five front speakers, five surround channels, Two LFE and two height, plus the addition of a second sub-woofer. 10.2 Surround Sound was an experiment conducted by Tomlinson Holman in December 2007. You can read the experiment details here.

Dolby Surround is the consumer version of the original Dolby multichannel analog film sound format Dolby analog and Dolby SR (Spectral Recording). When a Dolby Surround soundtrack is produced, four channels of audio information (left, center, right and mono) surround are matrix-encoded onto two audio tracks. These two tracks are then carried on stereo program sources such as videotapes and TV broadcasts into the home where they can be decoded by Dolby Pro Logic to recreate the original four-channel surround sound experience.

A standard for high-quality digital audio that is used for the sound portion of video stored in digital format, especially videos stored on DVD-ROMs. Dolby Digital delivers six channels in the so-called “5:1” configuration: left, right, and center screen channels, separate left and right sounds, and a subwoofer channel. This is sometimes called surround sound or 3D sound.

Dolby TrueHD is the next-generation lossless technology developed for high-definition disc-based media. Features of Dolby TrueHD include the following: 100 percent lossless coding technology, up to 18 Mbps bit rate, support for up to eight full-range channels of 24-bit/96 kHz audio, and it is supported by High-Definition Media Interface (HDMI).

Short for Digital Theater Sound, it is a multichannel surround sound format used in both commercial and consumer applications. DTS was created by the company for which the technology was named, Digital Theater Systems (which is now called DTS as well). DTS is a competing technology with Dolby Digital.

Short for Digital Theater Sound – Extended Surround. The 6.1 matrixed system enables cinemas to deliver extreme spatial effects that literally surround the audience. A rack mounting DTS-ES decoder creates a back-surround (BS) channel from encoded surround tracks, in typical theatre applications feeding a back-surround speaker array (configured as left-back-wall and right-back-wall for stereo operation). The system is compatible with all current extended surround formats and an auxiliary surround channel is also provided for other applications. ES modes can be selected via automation inputs or via the built-in DTS time code reader, which detects ES serial numbers for automatic DTS-ES playback.

Did You Know…?
Despite the fact that IMAX cinemas use more than 300 speakers, the movies have only a six-channel digital sound track.

This article was originally published on November 18, 2005