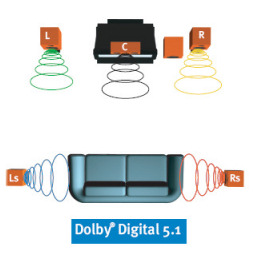 )Surround sound is a term used to describe a type of audio output in which the sound appears to “surround the listener” by 360 degrees. Surround sound systems use three or more channels and speakers in front and behind the listener to create a surrounding envelope of sound and directional audio sources. The term surround sound has become popular in recent years and more commonly used since the advent of home theater systems. Surround sound can be either an analog or digitalsystem.