A word processor is software or a device that allows users to create, edit, and print documents. It enables you to write text, store it electronically, display it on a screen, modify it by entering commands and characters from the keyboard, and print it.

Of all computer applications, word processing is the most common. Today, most word processors are delivered either as a cloud service or as software that users can install on a PC or mobile device.

What is the History of Word Processing?

The earliest word processors were standalone machines similar to electric typewriters that debuted in the 1960s. The great advantage of these early machines over using a typewriter was that you could make changes without retyping the entire document. Over time, the devices acquired more advanced features, such as the ability to save documents on a disk, elaborate formatting options, and spell-checking.

While there are still some standalone word processors in use today, word processing began to move to personal computers in the 1980s. In the early days of the PC, a word processor called WordPerfect became one of the most widely used applications of any kind. Over time, however, What You See Is What You Get (WYSIWYG) word processors that showed users exactly what would print on their final documents became more popular. One of those WYSISWG word processors, Microsoft Word, became dominant in the 1990s. 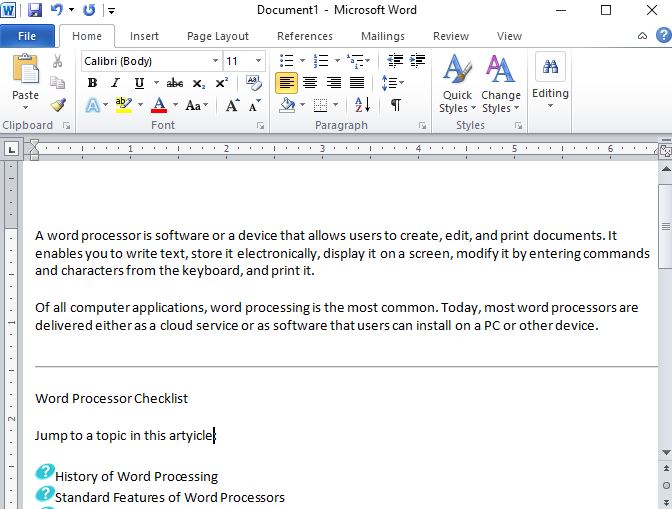 With the advent of cloud computing in the 2000s, word processing changed again. The cloud allowed users to do their word processing via a browser-based application. While these cloud-based word processors lacked the advanced functionality of software installed on a device, they allowed users to store their documents in a remote data center and access them from any Internet-connected PC or mobile device. They also made it easier for geographically separated teams of people to work together on the same document. Many users found that cloud-based word processors offered enough features to meet their needs, as well as greater convenience, mobility, and collaboration support.

What are Standard Features of Word Processors?

Word processors vary considerably, but all word processors, whether cloud-based or installed on a system, support the following basic features:

insert text: Allows you to insert text anywhere in the document.

cut and paste: Allows you to remove (cut) a section of text from one place in a document and insert (paste) it somewhere else.

copy: Allows you to duplicate a section of text.

page size and margins: Allows you to define various page sizes and margins, and the word processor will automatically readjust the text so that it fits.

word wrap: Automatically moves to the next line when you have filled one line with text, and it will readjust text if you change the margins.

print: Allows you to send a document to a printer to get hard copy.

font specifications: Allows you to change fonts within a document. For example, you can specify bold, italics, and underlining. Most word processors also let you change the font size and even the typeface.

windows: Allows you to edit two or more documents at the same time. Each document appears in a separate window. This is particularly valuable when working on a large project that consists of several different files.

Most installable modern word processor software supports additional features that enable you to manipulate and format documents in more sophisticated ways. Full-featured word processors usually support the following advanced features, and cloud-based word processors may have some of these features as well:

headers, footers, and page numbering: Allows you to specify customized headers and footers that the word processor will put at the top and bottom of every page. The word processor automatically keeps track of page numbers so that the correct number appears on each page.

layout: Allows you to specify different margins within a single document and to specify various methods for indenting paragraphs.

macros: Enables users to define and run macros, a character or word that represents a series of keystrokes. The keystrokes can represent text or commands. The ability to define macros allows you to save yourself a lot of time by replacing common combinations of keystrokes.

merge: Allows you to merge text from one file into another file. This is particularly useful for generating many files that have the same format but different data. Generating mailing labels is the classic example of using merges.

thesaurus: Allows you to search for synonyms without leaving the word processor.

collaboration: Allows users to track changes to the document when more than one person is editing. Some cloud-based word processors also allow multiple users to edit the same document at the same time.

translation and speech: As artificial intelligence capabilities become more commonplace, some word processors have gained the ability to read text aloud, to accept voice commands, and to translate text from one language to another.

Read also: What is a Spreadsheet?

Word processors are very similar to two other categories of software: text editors and desktop publishing applications. An example of a word processor is offered by Zoho.

Applications that support only the basic features from the first list above (and maybe a few others) are sometimes called text editors. Office workers sometimes use text editors to create simple documents that don’t require a full-featured word processor. However, text editors are more commonly used by programmers who use special text editors with features designed for writing code.

This article was updated April 2021 by Jenna Phipps