VMware Workstation is a line of hosted hypervisor products running on x64 computers that allows users to run virtual machines, containers, and Kubernetes clusters on a single physical machine and use them simultaneously along with the host machine. Each virtual machine can execute its own operating system, including versions of Windows, Linux, BSD, and MS-DOS. The software is developed and sold by VMware, Inc., a division of Dell Technologies.

VMWare Workstation supports hardware compatibility, acting as a bridge between the host and virtual machine. Hardware resources include hard disks, USB devices, and CDs. All device drivers are installed by the host machine. The software can save the state of a virtual machine (known as Snapshots) at any instant. This state can later be restored, meaning at any time the virtual machine can return to that saved state if there was damage made to it after being saved. 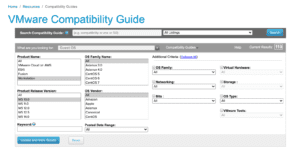 IMAGE: VMWare features a compatibility guide that provides a single point of access for all VMware hardware compatibility guides. The search tool streamlines the HCL posting process and offers advanced search capabilities and the ability to save the guide(s) or search results in the csv format.

Read more: What is a hypervisor?

There are two products collectively referred to as VMWare workstation: Workstation Pro and Workstation Player. Player is a free local virtualization solution for Windows and Linux that was created for non-commercial use, but it does have a paid version if using commercially.

Pro is a solution for running multiple operating systems as virtual machines for Windows and Linux that was created for commercial use and requires a one-time payment to use. Major differences between the two are outlined in later sections.

A few uses of VMWare Workstation include:

Read more: What is a virtual machine?

Fundamentally, Workstation Pro and Workstation Player share the same hypervisor technology, but each has a unique user interface for different types of use. The hardware and host operating systems requirements are the same for both.

How does VMWare Workstation work?

Workstation uses special functions in modern 64-bit CPUs to create fully isolated, secure virtual machines that summarize an operating system and its applications. The VMWare virtualization layer maps physical hardware resources to a virtual machine’s virtual resources. Through this, each virtual machine has its own CPU, memory, disks, and input/output devices.

The first version (1.0) of VMWare workstation was released in May of 1999. A new version was released almost every year thereafter. These releases featured a mix of bug fixes, issue resolution, and support for new operating systems.

In January of 2016, the entire development team for Workstation was disbanded and all US developers were immediately fired as part of VMWare’s annual workforce rebalancing efforts. VMWare stated that this shift would not impact products. In September of that same year, a new version of Workstation was released, signifying that the company was still progressing with the product.

Use cases of VMWare Workstation

Use cases for Workstation Pro

Workstation Pro is best for any user in the commercial space, but it’s most used by IT personnel, developers, and business leaders.

IT personnel can run virtual machines that are compatible with their corporate data center from their laptop or PC. They use Workstation Pro to perform management tasks on vSphere and integrate with network tools to fully design and test enterprise topologies without using expensive mission-critical hardware. It’s also used to test operating system and application security on client machines while remaining isolated from the physical computer’s memory and storage.

Developers use Workstation Pro to develop and test applications in a virtual sandbox. They can rapidly create and delete virtual production-like environments using containers, virtual machines, or Kubernetes clusters. Using shared folders, they can mount source code folders to one or many virtual machines or containers at the same time. Workstation Pro has built-in encryption, meaning every virtual machine can be secured by developers and access can be limited to only authorized users.

Business leaders use Workstation Pro to deliver secure work-from-home desktops and apps. End users can run Windows on Mac, or Linux on Windows or Mac without rebooting. Mission-critical legacy applications can be deployed on modern hardware while still remaining compliant and secure.

Use cases for Workstation Player

Workstation Player is best for students, faculty, businesses, and corporate users who need a small sandbox environment for testing or control.

In educational settings, students get a simple environment for exploring new operating systems while faculty can provide repeatable, controlled lab environments for class activity without the need for an internal cloud. The evolving technology landscape can be tested with VMWare’s virtualization tools in a virtual sandbox on an existing PC.

In business settings, Player allows users to work wherever they are by providing a corporate desktop image that can run managed or unmanaged on the end user’s laptop or PC. The app allows for easy access to other corporate apps, and IT administrators can centrally manage and enforce security policies with it.