Near field communication (NFC) is a protocol that allows two devices to communicate wirelessly via radio signal when in close proximity with one another, approximately 4 inches or less. It’s a subset of radio-frequency identification (RFID) and is similar to Bluetooth and WiFi.

An NFC tag is a RFID transponder—a small chip connected to an antenna. The chip has a unique ID, used to uniquely pair an NFC tag with an object, and rewritable memory. The antenna allows the chip to interact with an NFC scanner, such as a smartphone. An NFC tag is passive, meaning it doesn’t have a power source. Instead, it draws power from the device that reads it. When the reading device comes into proximity, it energizes the NFC tag and transfers data via radio waves broadcasting at 13.56 MHz.

Some NFC tags are incorporated right into a device’s circuitry, and most operating systems support native NFC functionality, including Windows, iOS, Android, and BlackBerry. But the most common form is a small sticker containing the circuit and antenna. Because it doesn’t need a power supply, the tag can remain in service for years and continue to function without error.

These tags can store a wide variety of information, such as web addresses, contact details, or links to applications. It’s a simple way to push information to a device, replacing the need for bar or QR codes. NFC tags can also act as electronic identity documents, keycards, and credit cards. RFID is a generic term for technologies that use radio waves and frequency to automatically identify the tag attached to an object. It’s a one-way process, and information is transmitted from an encoded memory chip via an antenna to an RFID reader. There are two types of RFID tags: active and passive.

Hierarchically, NFC is a subset of RFID, and while both operate under the same underlying technology, they differ in a few ways.

NFC tags run at passive RFID’s high frequency (13.56 MHz). The technology has two-way communication, as opposed to RFID’s one-way limitations. For example, a smartphone with NFC technology can pass information like documents or payment information back and forth with another device.

One of the biggest differences is that RFID can be used from a distance, but NFC has a maximum range of 4 inches. This means NFC readers aren’t suitable for inventory tracking or processes that require higher reading range.

In card emulation mode, an NFC device acts like a contactless smart card (a standard credit card with an embedded contactless chip), allowing users to take advantage of tap-to-pay services. Apple Pay, Google Pay, and Samsung Pay are all powered by card emulation.

Peer-to-peer (P2P) mode allows two-way data transmission between active devices. This allows users to “bump” or touch another device to share information. Examples of this include passing music back and forth, playing a game with a friend, or tapping a router to connect to its WiFi network without using a password.

In reader/writer mode, the NFC-enabled device acts as a reader. It works in active mode to read the contents of an NFC tag. If the device detects more than one tag, it relies on an algorithm to select one tag. A user who holds their NFC device in read/write mode near a transponder can read and transmit data from it.

An NFC tag has the same basic architecture as an RFID tag, meaning they both have storage memory and a radio chip attached to an antenna. The difference is that NFC tags are formatted specifically to be used with NFC systems.

An NFC tag is small and cheap enough to integrate into a range of products such as business cards, entry passes for an event, bluetooth speaks, and even washable tags attached to clothing.

Since NFC tags operate without a power supply, they can’t do any processing on their own. Instead, these tags are used to transfer information to an active device, such as a smartphone. To power these tags, electromagnetic induction is used to create a current in the passive device. 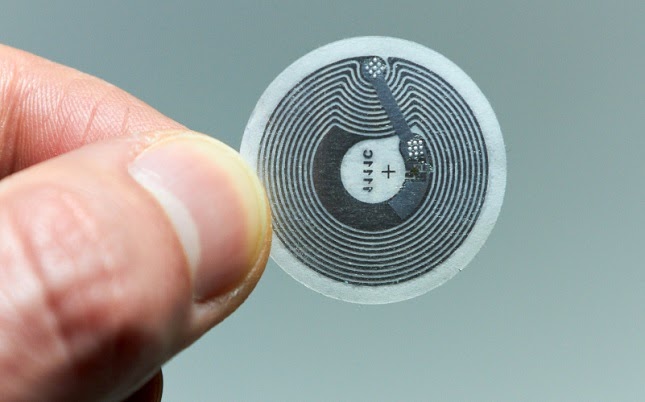 Image: The induction coil and microchip are shown on the back of this NFC sticker tag.

The coils of wire wrapped inside of the NFC tag (shown below) is used to produce electromagnetic waves, which are then picked up and turned into a current by another coil of wire. This process is similar to wireless device charging techniques, but much less powerful.

Power is typically lost when transmitting information via air, and very high power requirements would be unrealistic for battery-powered mobile devices, which is why NFC operates only within a few inches.

What are NFC tags used for?

One of the most common uses of NFC tags is for mobile payments. Newer credit and debit cards include an NFC tag, so users can hold their card just above a payment terminal rather than swiping or inserting it. NFC-enabled credit and debit cards will have a symbol on the front or back that looks similar to the images below.

Smartphones that are NFC-enabled can also conduct mobile payments when paired with an app like Google Pay, Apple Pay, or Samsung Pay. The phone acts as a virtual NFC tag and can be touched to or waved over an NFC-enabled payment terminal, replacing the need to use a physical credit or debit card.

Companies have begun to integrate NFC tags into their products for additional interaction after customers have bought the item.

For example, Nintendo has included NFC tags into their Amiibo figures. Once a user holds their device near the tag, they receive special characters, items, or additional content. Nike includes NFC tags in sports jerseys and shoes. Once scanned, users get personalized content based on the product, such as statistics on a specific player or recent scores for a team.

Data can be transferred wirelessly between two NFC-equipped devices. When two phones are touched back to back, the content being viewed on one device will be sent to the other, such as photos or contacts. File transfers can be handled via Bluetooth once the transfer is initiated, but users won’t have to go through a Bluetooth pairing process; it will be transferred using NFC technology.

NFC-enabled devices can be used to replace transit passes on transit systems or boarding passes at the airport. NFC can also be used to access secured areas. Users with corresponding NFC tags can tap their device or card against a security reader, allowing them access to the area.

Apple released a feature called Car Keys that allows users to unlock, lock, and start their NFC-capable vehicle with their NFC-enabled device.

Charles Walton received the first patent to be associated with the term RFID in 1983, but similar technology was used by the Allies and Germany in WWII to identify an aircraft as friendly or hostile.

In 2002, Sony and Phillips worked together to co-invent a technology specification and technical outline for NFC. In 2003, the specification was approved as an ISO/IEC standard and later as an ECMA standard. One year later, Nokia, Sony, and Phillips established the NFC Forum, a non-profit industry association that promotes the use of NFC short-range wireless interaction.

By 2010, multiple NFC-enabled Nokie phones were released, and the first NFC-enabled Android phone was created: the Samsung Nexus S.

In 2013, Samsung and Visa announced their partnership in developing mobile payment using NFC technology. By 2015, Apple and Android both had NFC-enabled devices and developed mobile payment systems using NFC—Apple Pay and Google Pay.

NFC continues to grow and dominates markets in Europe, Asia, Japan, and the US.

NFC tags communicate using the ISO 14443 types A and B wireless standards, which are the international standards for contactless smartcards. This is why NFC devices can be used with existing contactless technologies.

Type 1 tag is the simplest of the offerings. It’s the slowest chip, but has ample memory availability of 96 bytes, sufficient to store a website URL or other small amount of data. Because type 1 tags are simple, they are inexpensive. These tags are used for the following applications:

Type 2 tags are faster than type 1 tags but hold the same amount of memory. Prices for type 2 tags are also low, as the Type 2 only holds enough data for simple pieces of information. These tags are used for the following applications:

Type 3 tags use a different standard, the Sony Felica standard, used primarily in Japan. This tag type provides a wide range of functionality and more memory, but it’s also more expensive. These tags are used for the following applications:

Type 4 tags offer the most flexibility and memory of all tags. They have a larger memory capacity of 32 kilobytes. Type 4 tags are the only tags that support ISO 7816 security, making this tag the most secure option available.

Type 5 tags offer support for the ISO/IEC 15693 specification, which means it supports Active Communication Mode. This allows overall data transfer performance similar to radio frequency technologies already supported by the NFC Forum. The reading distance is the same with Type 5 tags than all other types, but it can read tags such as: