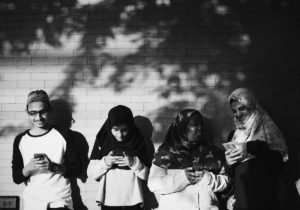 An International Mobile Equipment Identity (IMEI) is a unique number for identifying a device on a mobile network. It operates the same as a social security number or serial number but identifies phones specifically. The number has 15 digits and consists of four groups like the model below:

The IMEI identifies a unique mobile phone so that it can be tracked. Mobile phones that use a Global System for Mobile Communication (GSM) system and have AT&T or T-Mobile cellular plans worldwide have an IMEI number. The IMEI was originally created because the SIM card within a mobile device could not be a permanent identifier of the device, and the device had to have some sort of identifier.

An IMEI number is assigned to every GSM phone, GSM being a digital cellular system. Phone carriers and manufacturers share IMEI numbers to enable the tracking of smartphones that may be stolen or compromised. For example, if someone were to have their phone stolen, they can contact their carrier and have the device blacklisted based on its IMEI number. This means the phone won’t be able to make or receive calls or connect to the internet, even with a new SIM card.

An IMEI number is also useful when buying a used phone. Using an IMEI checker will reveal if a phone has been reported lost, blacklisted, or subjected to an insurance claim. The identification number also reports details about a phone such as the brand, model, year of release, and other specifications.

Whenever a mobile device uses a specific network to form or receive a call, or send or receive a message, its IMEI number is automatically emitted and tracked, making it possible to locate the phone if it’s been lost or stolen using a phone-tracking application.

Mobile Equipment Identifier (MEID) is a unique 14-digit number that identifies a specific cell phone. The MEID format was initially developed to replace the Electric Serial Number (ESN) format, which ran out of unique identifying numbers in November 2008.

Any phones that use the Code Division Multiple Access (CDMA) system and have a Sprint, Verizon, or U.S. Cellular cellular plan have an MEID. If the phone has both an IMEI and MEID, the MEID number is a phone’s IMEI number minus the last digit.

The MEID number consists of 14 hexadecimal digits. The 14 digits are the same as the IMEI digits, which are broken down below following the WW-XXXXXX-YYYYYY format:

The IMEI number consists of 15 decimal digits. Unlike the MEID number, the IMEI number has a check digit on the end of the code (the Z at the end of the IMEI format), calculated using the Luhn formula to help guard against the possibility of incorrect entries to the new Central Equipment Identity Register (CEIR) and Equipment Identity Register (EIR) equipment. There is no functional difference between the IMEI and MEID number.

Differences between IMEI and MEID

HOW TO CHECK YOUR IMEI NUMBER

The IMEI number is commonly found within a phone’s settings. However, in older iOS or Android devices, the IMEI may be found inside the SIM tray or on the back of the device. If the device has a removable battery, the IMEI is located under the battery next to the SIM slot. For finding the IMEI on newer devices:

Another, easier way to check the IMEI on an Android phone is to dial *#06#. After dialing, the number should appear on the screen.

Once the IMEI number is found, store the number in a safe place. If the number gets into the wrong hands, malicious parties could use the number to compromise the phone’s service. Do not share your IMEI number with anyone unless necessary.

Changing your IMEI number means replacing your original IMEI number with a new one. A few reasons one chooses to change their IMEI number are as follows.

Changing your own IMEI is not advisable. Doing so requires software and technical knowledge that can render your phone inoperable, or create significant security risks. There is no significant benefit in terms or privacy or security that outweighs the risk associated.

When you change it, it legally proves that you have forfeited ownership of the mobile device. In countries such as the United States and the European Union, it’s illegal to change a phone’s IMEI number. If it is changed, it’s possible the new IMEI you replaced it with belongs to another phone already in use, making your device unusable.

As the IMEI number is hardcoded into the mobile device, changing the numbers could damage it. Because of this, factory resetting does not change the number.

In addition, once an IMEI number is added to the blacklist, networks are blocked on the device. It’s possible network operators may discover that the IMEI number is not the one originally installed on the phone and block the new one as well.

There are multiple apps available for both iOS and Android devices for checking and tracking your IMEI number.

Tools for checking your IMEI

Checking the IMEI number of a device can be used when buying a new phone to check the status and previous ownership. These tools are useful when purchasing a phone from a private party. If it has been used before in another country or blacklisted, these IMEI checking tools will notify you, as they have access to IMEI databases.

MobiCheck allows users to enter their IMEI number in the app to check whether the device has been marked as stolen or blacklisted. The first check is free, but subsequent checks cost 20 cents per check.

iUnlocker is an online iOS or serial number checker. The website provides a range of information by entering the IMEI number in the search function. Information provided includes technical support, blacklist status, repairs, and service coverage. The website is free, but carrier, SIM, or seller information incites a charge.

IMEI Analyzer is a popular Android tool, so it was created for iOS as well. Users can verify the validity of their IMEI and get a breakdown of each individual part of the IMEI, such as Type Allocation Code, Reporting Body Identifier, Final Assembly code, and Check Digit. It can also calculate the final, 15th digit in the IMEI number (the check digit) by using the Luhn algorithm.

IMEI.info uses the Type Allocation Code digits in the IMEI number to find the exact model of the device. The search engine will then show the phone’s information, such as warranty info, simlock status, IMEI carrier check, and blacklist report.

Check IMEI connects with official IMEI databases to verify if the IMEI is valid or counterfeit by ensuring it hasn’t been previously used in another country.

The IMEI app shows basic information about a device, such as the IMEI number, sim information, and serial number.

Tools mentioned for checking your iOS IMEI number that also apply to an Android system include IMEI Analyzer and IMEI.info.

Tools for tracking your IMEI

If you’ve lost your mobile device, there are multiple apps for iOS and Android to track the IMEI number to find its location and secure the data on it.

Find My Phone can track both iOS and Android devices with their GPS tracker in real time. Users can see where their device has been throughout the day using the location history feature.

Find My Phone: Find Lost Phone uses GPS tracking functionality to find lost, stolen, or misplaced devices by providing the exact location of the missing item. Users can send a message notification to the lost or stolen device with contact information if the device is found.

Prey Find my Phone Tracker GPS can protect up to three devices on a single account by tracking the device’s GPS geolocation. Mark an area on a map, and get an alert when your device enters or leaves it. The iOS app also stores device and user information with an activity and modification log.

Spyic is a parental control and remote monitoring app that also comes with GPS tracking features. Track a device’s location with timestamps, and see addresses and geolocation coordinates. The iOS version of Spyic is fully web-based, so no download is required.

Google Find My Device allows users to see their phone, tablet, or watch on a map. If the current location isn’t available, the application will show the last known location. Users can also erase the device or lock it with a custom message and contact number on the lock screen.

Where’s My Droid provides GPS coordinates with a link to Google maps of your device’s location. Users can also turn the ringer volume up and make the phone ring if it’s in range.

If your device is stolen, mobile data can be secured by locking your stolen phone or wiping it of all personal information.

Lost Android allows users to remotely control their Android phone from a web browser link or SMS. Users can lock their lost phone or wipe the data completely. Other features include locating the device by GPS or network, forwarding calls, and starting an alarm remotely with a flashing screen.

Lookout protects user’s data from dangerous Wi-Fi attacks and tracks stolen or lost mobile devices. It comes with mobile security and antivirus protection and offers an alert system that will sound the mobile devices alarm even if it’s on silent.