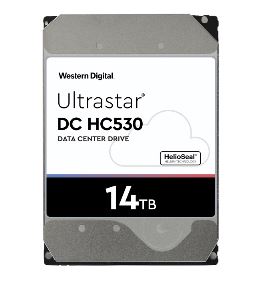 Compared to air, helium is one-seventh the density. In traditional drives, the air inside typically creates an amount of drag on the platters, requiring more energy to spin. Replacing the air with helium reduces the amount of energy needed to spin the platters. By some estimates, helium HDDs may be up to 20 percent more efficient than air-filled drives. Additionally, helium drives offer higher sequential data transfer rates as a result of the overall increased areal density.

Helium Storage in the Data Center

As helium-filled drive technology advances, so does the storage capacity of the drives. In fact, Western Digital has announced (Sep 2019) a 20-TB helium-filled drive, using nine platters, each with a capacity of about 2.22TB and a 2.5M hour mean time before failure (MTBF) rating and feature SATA or SAS interface.

Currently, helium-filled drives that focus on the consumer market are limited. Standard drives are 3.5″ drives that use perpendicular magnetic recording (PMR) platters in a helium-filled enclosure, in capacities starting at 10-TB. The drives are compatible with specific lines of desktops and entry-level direct-attached storage enclosures.

What is COBOL? COBOL stands for Common Business-Oriented Language. It is a 60-year-old programming...
Read more
Definitions

Shared hosting is a web hosting model in which multiple sites occupy the...
Read more
Definitions