This guide is designed to help you understand the differences between parallel and serial interfaces, including SCSI, ATA, SAS and SATA.

Short for small computer system interface, a parallel interface standard used by Apple Macintosh computers, PCs and many UNIX systems for attaching peripheral devices to computers. Nearly all Apple Macintosh computers, excluding only the earliest Macs and the recent iMac, come with a SCSI port for attaching devices such as disk drives and printers. SCSI interfaces provide for data transmission rates (up to 80 megabytes per second).

Also known as IDE, ATA is a disk drive implementation that integrates the controller on the disk drive itself. ATA is used to connect hard disk drives, CD-ROM drives and similar peripherals and supports 8/16-bit interface that transfer up to 8.3MB/s for ATA-2 and up to 100MB/s (ATA-6). 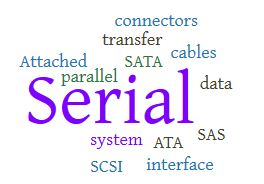 So, what do parallel interfaces have to do with SAS (Serial Attached SCSI) and SATA (Serial ATA) drives? A lot, actually. It is the architectural limitations of the parallel interfaces that serial technologies like SAS and SATA address. In contrast to multiple parallel data stream, data is transmitted serially, that is in a single steam, by wrapping multiple bits into packets and it is able to move that single stream faster than parallel technology.

Abbreviated as SAS, Serial Attached SCSI, an evolution of parallel SCSI into a point-to-point serial peripheral interface in which controllers are linked directly to disk drives. SAS is a performance improvement over traditional SCSI because SAS enables multiple devices (up to 128) of different sizes and types to be connected simultaneously with thinner and longer cables; its full-duplex signal transmission supports 3.0Gb/s. In addition, SAS drives can be hot-plugged.

Often abbreviated as SATA, Serial ATA is an evolution of the Parallel ATA physical storage interface. Serial ATA is a serial link a single cable with a minimum of four wires creates a point-to-point connection between devices. Transfer rates for Serial ATA begin at 150MB/s.

Starting with SATA, it extends the capabilities of ATA and offers transfer rates starting at 150MB/s and, after years of development, has moved to the mainstream of disk interfaces. The successor the SCSI interface is SAS at speeds of up to 3Gb/s. Additionally, it also addresses parallel interface issues such as drive addressability and limitations on the number of device per port connection.

SAS devices can communicate with both SATA and SCSI devices (the backplanes of SAS devices are identical to SATA devices). A key difference between SCSI and SAS devices is the addition in SAS devices of two data ports, each of which resides in a different SAS domain. This enables complete failover redundancy. If one path fails, there is still communication along a separate and independent path.

Another big advantage of SATA over ATA is the cabling and connectors. The serial interface reduces the amount of wires needed to transmit data, making for much smaller cable size and making it easier to route and install SATA devices. The IDE cables used in parallel ATA systems are bulkier than Serial ATA cables and can only extend to 40cm long, while Serial ATA cables can extend up to one meter. In addition to the cabling, a new design of connectors is also used that reduces the amount of crosstalk between the wires, and the connector design also provides easier routing and better air flow.

The Benefits of SAS & SATA in Storage

Serial interfaces offer an improvement over older parallel SCSI (with a serial version) in storage applications and environments. These benefits include better performance, better scalability, and also better reliability as the parallel interfaces are at their limits of speed with reliable data transfers. SAS and SATA drives can also operate in the same environment while SCSI and ATA cannot. For example, using faster SAS drives for primary storage and offloading older data to cheaper SATA disks in the same subsystem, something that could not be achieved with SCSI and ATA.