Hype Versus Action in the Developer’s World

New terms and new concepts seem to continuously be making their way into the media and onto web sites. For example, the buzz recently has been is around terms like cloud computing, Internet of Things (IoT), Business Process Management, BI, Big Data, cross-platform mobile development, DevOps,  Hadoop, and much more. There never seems to be an end to the new terms and new things that developers and other technologist have to learn.

While this is great for sites like Webopedia that provide definitions for all these terms, the real question is how much of these new technologies are real and how much is hype? Asked differently, are developers really using this stuff, or is it just fodder for the media to write about?

Most new technologies have an adoption curve that starts slow with leading edge adopters, but then shifts up as the masses adopt. The curve then goes down after the majority has adopted the technology. Often times in the tech world, this process can take years. Most major new programming languages and concepts can take 10 years or more to be adopted into the mainstream. Some go quicker, and some go slower.

As a developer, it is good to understand the meaning or definition of the concepts even if you aren’t using them. For example, a good developer should know what all of the terms I listed above meant and how they could be used. Once you know this information, it is easier to determine if there could be an impact and whether the topic is hype. You can figure that if a majority of the developers say they are using a technology, then it isn’t hype. I’d even argue that if a quarter of the developers say they are using something, then it is well beyond hype.

So let’s look at a couple of the topics.

The cloud and cloud computing have many means and many applications. You can learn about them by digging into some of the various subtopics such as PaaS, IaaS, SaaS, cloud storage, and virtualization. You can also learn more about it at the Developer.com Cloud Computing Project Center.

Even in a rough poll of developers on our discussion forums, over 27% state they have created an account on a cloud service. 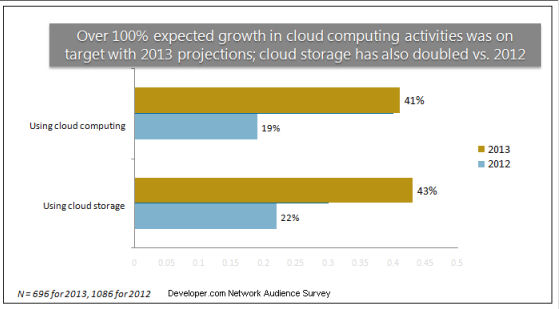 It is more obvious that mobile development is not hype, but the question becomes, “are there really that many people doing it?” The answer is yes, a lot of developers are doing mobile development. Again, in a poll of the Developer.com Network community, we asked about developing for various mobile platforms. Of all developers, 29% said they were developing Android applications. 23% were building iOS apps, and 18% (up from 9% the previous year) were building Windows Phone apps.  Over half (54%) of developers are using smartphones and/or tablets for developing applications.

As no surprise, mobile development is not all hype. What might be surprising is that Android is clearly leading and Windows Phone is growing.

Are other Topics Hype?

Often times technologies start as hype but with time become adopted. While this did used to take more than a decade in the past, times have changed. Technologies like IoT can hit the market and get adopted rather quickly. As a developer or technologist, it is worth reading the hype and knowing the concepts. Sometimes the hype turns real and provides you with new alternatives for doing better development! 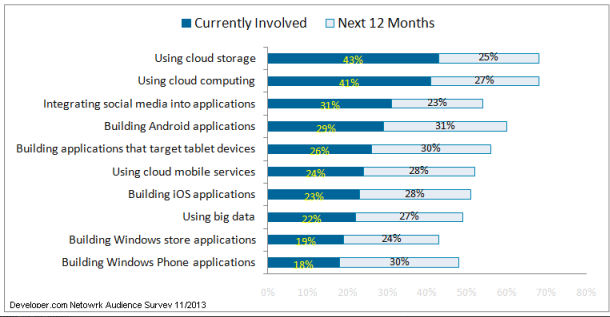 Bradley L. Jones is the Director and Editor in Chief of the Developer.com Network of sites, which includes Developer.com, Codeguru, DevX, and HTMLGoodies. He is an internationally bestselling author who has written more than 20 developer-related books across a variety of topics ranging from C++ to Windows and from C# to Web 2.0

This article was originally published on July 15, 2014