Corporations are pretty stoked about the Internet of Things, if a new survey by QuinStreet Enterprise is any indication.

IoT Will Have Huge or Considerable Impact

Seventy percent of respondents believe that IoT will have a “huge” or “considerable” impact on their industry over the next five years (see graphic below). Over the next three years, IDC expects IoT sales to double to more than a billion-dollar market, so the enthusiasm is backed by real money. 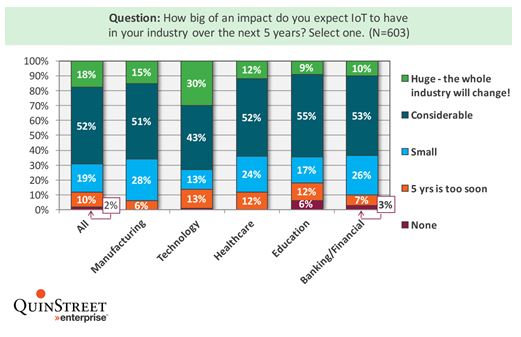 Surprisingly, the biggest driver of IoT may be that companies want to appear innovative to their customers. “Innovation” was the primary motivator for exploring IoT adoption, with enhancing the customer experience the top perceived benefit (see next two graphics). For those early adopters already using IoT technology – about 15 percent of respondents, with another 14 percent in progress – corporate interests appear to be driving adoption more than IT or engineering interests. The full report can be downloaded (registration required).

This article was originally published on June 23, 2016