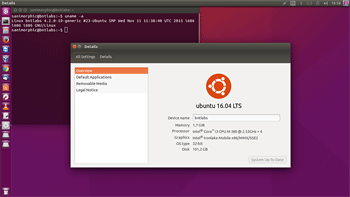 Xenial Xerus is the Ubuntu codename for version 16.04 of the Ubuntu Linux-based operating system. Officially released on April 21st, 2016, Xenial Xerus follows the Wily Werewolf (v15.10) release and serves as a significant update for Ubuntu, featuring improved integration with OpenStack (including Mitaka support), the addition of the snaps secure app format for packages, and the LXD pure-container hypervisor.

As a long-term support (LTS) release, Xenial Xerus users will receive five years of support from Canonical, the developers of Ubuntu, for the operating system (as opposed to nine months of security updates and support for the non-LTS releases). New Ubuntu LTS releases debut every two years, with the last Ubuntu LTS being the Ubuntu 14.04 Trusty Tahr distribution in April 2014.

For developers, the Xenial Xerus 16.04 release includes the Snapcraft tool, which simplifies building, developing and distributing snap packages. Ubuntu 16.04 also retires the Ubuntu Software Center, discontinues sending your desktop searches over the Internet by default, moves Unity s dock to the bottom of the computer screen and more.

What Exactly Is a Xenial Xerus?

Xenial is an adjective that refers to a state of being hospital or friendly, particularly to visiting strangers or foreigners, and a xerus is a long-tailed ground squirrel native to Africa. Xerus resemble prairie dogs in many respects, and they band together while living in burrows in woodlands or grasslands.

The Xenial Xerus release of Ubuntu Linux has been followed by Ubuntu 16.10 Yakkety Yak as of October 2016.