Windows 8 hybrid is the phrase used to describe a mobile computing device that combines typical features of both a tablet and laptop in a single device, running the Windows 8 operating system. 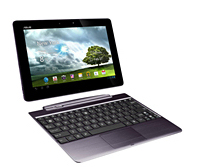 Photo: The ASUS Transformer Pad combines the portability of a tablet with the productivity of a notebook.

A Laptop and Tablet in One Device

Many device manufacturers, including ASUS and Samsung, have launched laptop-tablet hybrids that combine touchscreens with full-size keyboards. Other Windows 8 hybrids can attach to docks or feature folding or flip keyboards. The benefit of a Windows 8 hybrid is that it can be used as a touchscreen tablet or laptop.

A new trend in Windows 8 hybrid devices is to offer a “Windows 8 laptop” experience when connected to a keyboard, but when the keyboard is removed and used as a standalone device, it becomes an “Android tablet”.