An entity relationship model, also called an entity-relationship (ER) diagram, is a graphical representation of entities and their relationships to each other, typically used in computing in regard to the organization of data within databases or information systems. An entity is a piece of data-an object or concept about which data is stored. 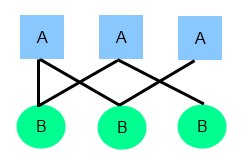 In an ER diagram, symbols are commonly used to to represent the types of information. Most diagrams will use the following:

Virtualization software is a digital solution used to create an abstraction layer for hardware. The software creates multiple instances, or virtual machines (VMs), that...