The 7 Layers of the OSI Model

The Open System Interconnection (OSI) model defines a networking framework to implement protocols in seven layers. Use this handy guide to compare the different layers of the OSI model and understand how they interact with each other.

The Open System Interconnection (OSI) model defines a networking framework to implement protocols in seven layers. There is really nothing to the OSI model. In fact, it’s not even tangible. The OSI model doesn’t perform any functions in the networking process. It is a conceptual framework so we can better understand the complex interactions that are happening.

Who Developed the OSI Model?

The International Standards Organization (ISO) developed the Open Systems Interconnection (OSI) model. It divides network communication into seven layers. In this model, layers 1-4 are considered the lower layers, and mostly concern themselves with moving data around. Layers 5-7, called the the upper layers, contain application-level data. Networks operate on one basic principle: “pass it on.” Each layer takes care of a very specific job, and then passes the data onto the next layer.

The 7 Layers of the OSI

In the OSI model, control is passed from one layer to the next, starting at the application layer (Layer 7) in one station, and proceeding to the bottom layer, over the channel to the next station and back up the hierarchy. The OSI model takes the task of inter-networking and divides that up into what is referred to as a vertical stack that consists of the following 7 layers.

Note: Click each hyperlink in the list below to read detailed information and examples of each layer or continue scrolling to read the full article: 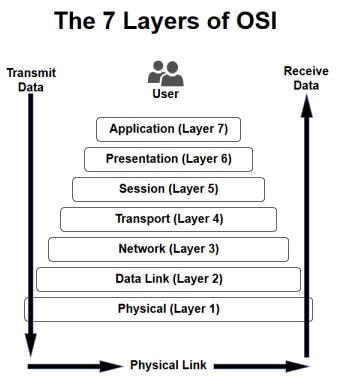 Did You Know…? Most of the functionality in the OSI model exists in all communications systems, although two or three OSI layers may be incorporated into one. OSI is also referred to as the OSI Reference Model or just the OSI Model.

This layer provides independence from differences in data representation (e.g., encryption) by translating from application to network format, and vice versa. The presentation layer works to transform data into the form that the application layer can accept. This layer formats and encrypts data to be sent across a network, providing freedom from compatibility problems. It is sometimes called the syntax layer.

Layer 3 provides switching and routing technologies, creating logical paths, known as virtual circuits, for transmitting data from node to node. Routing and forwarding are functions of this layer, as well as addressing, internetworking, error handling, congestion control and packet sequencing.

At OSI Model, Layer 2, data packets are encoded and decoded into bits. It furnishes transmission protocol knowledge and management and handles errors in the physical layer, flow control and frame synchronization. The data link layer is divided into two sub layers: The Media Access Control (MAC) layer and the Logical Link Control (LLC) layer. The MAC sub layer controls how a computer on the network gains access to the data and permission to transmit it. The LLC layer controls frame synchronization, flow control and error checking.

OSI Model, Layer 1 conveys the bit stream – electrical impulse, light or radio signal through the network at the electrical and mechanical level. It provides the hardware means of sending and receiving data on a carrier, including defining cables, cards and physical aspects. Fast Ethernet, RS232, and ATM are protocols with physical layer components.

DID YOU KNOW….? Two similar projects from the late 1970’s were merged in 1983 to form the Basic Reference Model for Open Systems Interconnection standard (the OSI model). It was published in 1984 as standard ISO 7498.

Tweet This Study Guide!
Webopedia study guides offer quick facts to help students prepare for computer science courses. Did you find this guide useful? Click to share it with friends and classmates on Twitter.

NEXT
The History of Blogging

Graphics file formats are not created equal. Knowing which one to use and...
Read more
Reference

The following mobile phone facts and statistics deliver an update on the status...
Read more
Reference