Fake news, or hoax news, refers to false information or propaganda published under the guise of being authentic news. Fake news websites and channels push their fake news content in an attempt to mislead consumers of the content and spread misinformation via social networks and word-of-mouth.

One of the more colorful definitions of fake news comes from PolitiFact: “Fake news is made-up stuff, masterfully manipulated to look like credible journalistic reports that are easily spread online to large audiences willing to believe the fictions and spread the word.”

The mission of fake news content isn’t typically for financial gain or at least not completely for profit but rather for luring visitors in via clickbaiting and then getting content consumers to virally spread the false information or hoax news.

Websites with fake news content frequently use a combination of website spoofing and authentic news styling techniques to mislead readers, creating their sites to closely resemble and operate like authentic news sites such as MSNBC or CNN. 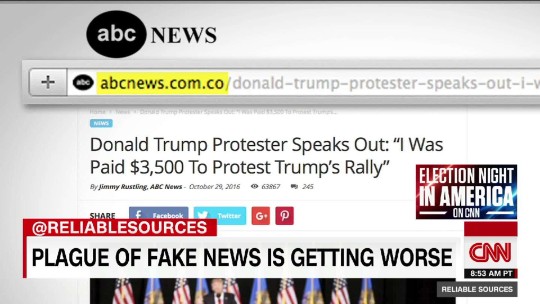 Fake news gained considerable attention in the 2016 United States election, with both Democrats and Republicans blaming the other for spreading false information. Many in the media and those publicly polled after the election believed the widespread proliferation of fake news helped influence the election’s results.

Both Facebook and Google have also been criticized for playing a large role in the spread of fake news, with fake news stories typically spreading via Facebook and being boosted in Google search results as the stories gained more attention from readers.

Facebook announced following the election that it would enact more stringent controls over paid advertisements and also flag stories of “questionable legitimacy” with an alert notifying readers that the content has been “disputed by third-party fact-checkers.” The social media company also launched a partnership with reputable fact-checking websites to identify and flag fake news and hoax stories.

As with many forms of malware, fake news frequently originates from outside of the United States, particularly in countries like Russia, even when the target is primarily an American-based audience. U.S. intelligence officials have commented that they “believe Russia helped disseminate fake and propagandized news as part of a broader effort to influence and undermine the presidential election,” according to BuzzFeed News.