In his first interview as the new CEO of Microsoft, Satya Nadella recently spoke with The New York Times about the organizational and cultural challenges he faces as the third CEO in the 39-year history of the technology giant. The leadership issues that Nadella discussed are relevant to the day-to-day concerns of many CIOs and IT professionals in today’s enterprise.

Everyone Owns the Innovation Agenda 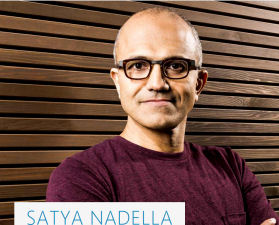 Like Microsoft, most IT organizations are struggling with how to be more innovative. In Nadella’s view, innovation is not a top-down agenda but a team effort: “Culturally, I think we have operated as if we had the formula figured out, and it was all about optimizing, in its various constituent parts, the formula. Now it is about discovering the new formula. So the question is: How do we take the intellectual capital of 130,000 people and innovate where none of the category definitions of the past will matter? Any organizational structure you have today is irrelevant because no competition or innovation is going to respect those boundaries… So how do you create that self-organizing capability to drive innovation and be focused?

“To me, that is perhaps the big culture change—recognizing innovation and fostering its growth. It’s not going to come because of an org chart or the organizational boundaries. Most people have a very strong sense of organizational ownership, but I think what people have to own is an innovation agenda, and everything is shared in terms of the implementation.”

In response to a question about how he plans to create a unified “one Microsoft culture” in what is often seen as a heavily siloed organization, Nadella’s answer surely resonates with every CIO today who is trying to align or integrate IT with the business.

The Most Important Thing Leaders Do?

For me, Nadella’s comments about the early leadership lessons he learned as a bowler on his school’s cricket team were the biggest (and most welcome) surprise of the Times interview. According to Nadella, “The No. 1 thing that leaders have to do: to bolster the confidence of the people you’re leading.”

I wonder how many CIOs would have provided the same answer as Nadella or considered the confidence of their team as an important workplace factor. After all, isn’t one of the core responsibilities of every leader to create more leaders?

CIOs who aspire to be a CEO can learn some valuable lessons from Nadella, an engineer and technologist who was previously executive vice president of Microsoft’s Cloud and Enterprise group. The Wikipedia entry for Nadella is a good place to start, especially because the references section contains numerous previously published profiles and interviews.

Jack Rosenberger is the managing editor of CIO Insight. You can follow CIO Insight on Twitter via @CIOInsight.

This article was originally published on March 17, 2014

In today's business world, managed services are more critical than ever. They can...
Read more
Definitions

Information technology (IT) due diligence is the process of investigating and understanding a...
Read more
Definitions

In the world of digital transformation, organizations are being compelled to integrate technology...
Read more