The Echo Dot is a smart speaker device in Amazon s range of Echo products. It uses Amazon s virtual assistant, Alexa, and ambient computing to respond to a wide range of voice-activated commands and inquiries. Through Alexa, the Echo Dot can stream music, report on the weather, and control smart home devices, among other functions. It gives users the ability to connect with third-party apps like Spotify, Twitter, and Uber for tasks such as playing a specific playlist, reading trending topics, and requesting a ride. The Echo Dot can also connect with other Echo devices in the same location to create a group of smart speakers that can be used simultaneously.

Compared to other devices in the Echo family, the Echo Dot is physically smaller about the size of a hockey puck. It hosts a smaller, lower quality speaker than its counterparts but is also more affordable. As with other Echo products, there is no monthly subscription required to use the Echo Dot, but it does need an Amazon user account to be activated.

Other Echo products include:

Launched in March 2016, the first Echo Dot looked a lot different from its successors. It featured a rotating ring around the top for adjusting the volume, an action button for activating Alexa without using voice commands, and a mute button for disabling the voice recognition/recording feature. No longer on the market today, the original Echo Dot was only available in black and could only be ordered through an existing Alexa-enabled device.

Less than 6 months later, Amazon released the second generation of the Echo Dot. The update removed the volume ring to make the device more cost-effective, adding volume control buttons instead next to the action and mute buttons. This version of the Echo Dot, which is still available for purchase directly from Amazon.com, is thinner and lighter than the first generation at half the price. Amazon improved voice recognition in second-generation Echo Dot devices and also introduced Echo Spatial Perception (ESP) technology, which optimizes multiple Echo devices to work together and respond through only one device. 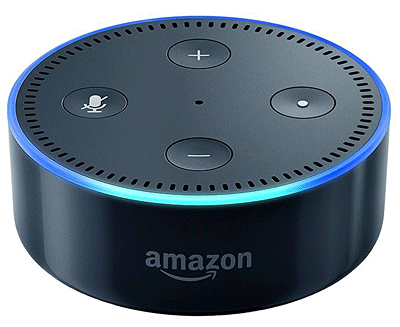 The third generation of the Echo Dot had a dramatic facelift when it was released in September 2018. The aesthetic changes give a more modern, elevated look to the puck-sized device and enable richer, louder, omni-directional sound by moving the speaker to the edge instead of restricting it to the top. This iteration is larger and heavier than both of the previous versions, but the rounded corners and upgraded materials signify a focus on design in addition to function. Amazon also introduced a model of the third generation that features a clock display on the side of the device a small addition that has many consumers questioning whether it justifies a $10 price increase.