Software-defined networking (SDN) and network virtualization technologies are poised to become mainstream, according to new research from QuinStreet Enterprise, publisher of this website.

When we asked our readers about SDN implementation two years ago, 14 percent of organizations had deployed SDN, and another 15 percent were planning on it.

Fast forward to today and implementation has doubled, with 28 percent of organizations using the technology and another 21 percent in the planning stages. On top of that, another 25 percent are considering the technology, so SDN has clearly made strong inroads in the last two years. 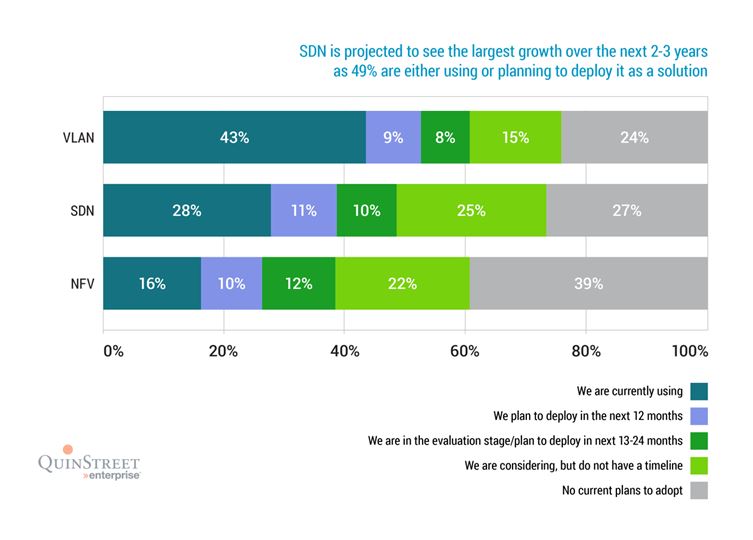 The difference between virtualizing cables or ports and the entire network infrastructure is great, however, so the greater growth is in software-based technologies like SDN and NFV. While SDN separates the control and data planes, NFV repackages network node functions into building blocks that can be deployed as services, similar to IT virtualization.

Cisco is the early leader in the SDN market (see chart below), but given the technology’s virtual underpinnings, it’s perhaps not surprising that Citrix and VMware are also strong players. Among mid-size and smaller companies, channel and solution providers are playing a key role. The survey of 466 IT professionals from the QuinStreet Enterprise databases was conducted in Oct. 2015. You can , and some of our top networking experts recently took part in a video panel on the survey.

This article was originally published on February 10, 2016