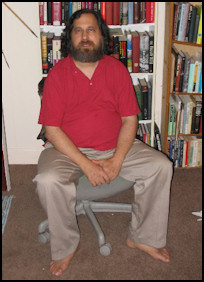 Richard Matthew Stallman is a software developer and self-titled software freedom activist. He is credited with founding the GNU Project in 1984 (first announced in 1983), and the Free Software Foundation in 1985. He is also the author of several development tools including the GNU Compiler Collection (GCC), the GNU symbolic debugger (GDB) and GNU Emacs.

In 1999, Stallman called for development of a free on-line encyclopedia through the means of inviting the public to contribute articles, the same philosophy which was adopted by the Wikipedia encyclopedia project