A hologram, also known as a holograph, is a three-dimensional (3D) projection that can be seen without the use of specialized cameras or glasses. It is a photographic recording of a light field, instead of an image formed by a lens. This 3D light field has depth, parallax (the difference between the image as seen by a viewing system and the image as recorded by the sensor), and other properties.

A hologram can be viewed from any angle, meaning a viewer can walk 360 degrees around it, and it will appear to move and shift realistically. Holographic images can be static, such as a picture, or they can be dynamic, such as an animated sequence that can be watched from any viewpoint.

Holography is the science and practice of making holograms.

On a smaller scale, holograms exist on most driver’s licenses, ID cards, and credit cards to make forgery difficult. They’re also present on CD, DVD, and software packaging. For example, Microsoft’s Certificate of Authenticity (COA) label on the outside of any of their boxed software includes holographic features for anti-counterfeit security and to prove its legitimacy.

On a larger scale, in the entertainment industry, holograms of past singers can be constructed to appear as if they are singing on stage. Other uses of holography include military mapping, digital information storage, visualizing patient data while training medical personnel, and art creation. 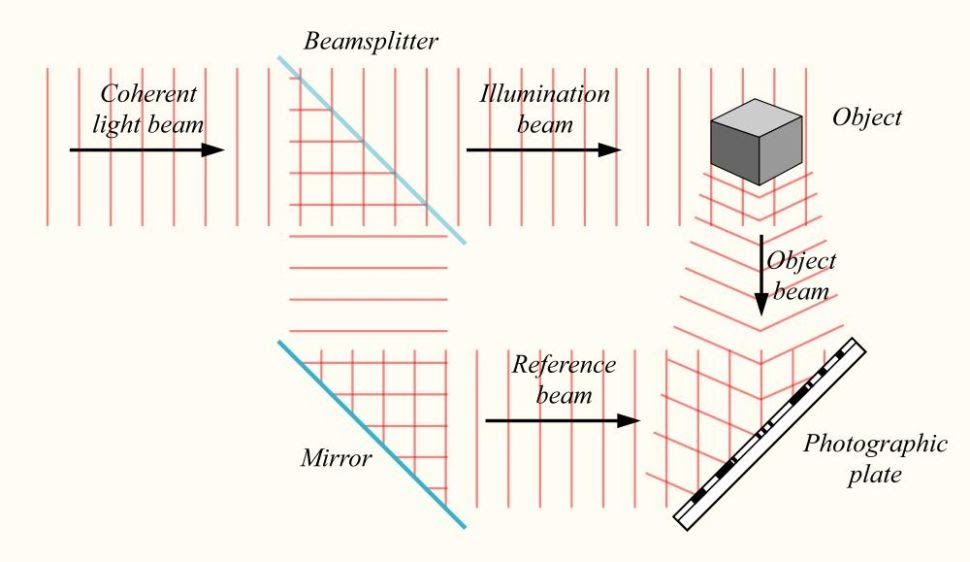 To create a hologram, one needs an object or person to record, a laser beam, a recording medium, and a clear environment.

When the beams cooperate, the interference pattern diffracts light into an accurate reproduction of the original light field. This allows the object to display visual depth cues that allows the object to change realistically with different viewing angles. Holograms do not just have the illusion of depth, but are truly 3D.