An abacus, also known as a counting frame, is a mechanical device used to perform mathematical functions. The calculating tool functions by sliding counters or beads along rods or grooves. It can calculate basic functions, such as addition, subtraction, multiplication, and division, and also calculate roots up to the cubic degree. The abacus has been used since ancient times, before the adoption of the written Arabic numeral system in places such as the ancient Near East, Europe, China, and Russia.

History of the abacus

Before computers or calculators, the abacus was the most advanced device for calculating numbers. Before the abacus came about, it was common for people to use fingers, toes, or easy-to-carry items to add up sums. The abacus has been in use in various parts of the world for over 4,000 years.

It’s unknown when the first abacus surfaced, but sometime between 2700 – 2300 BC the Sumerian abacus appeared in the Mesopotamia area. This is the oldest known form of the counting device, and it was based on the sexigesimal number system, or a numeral system with sixty as its base.

The first written information about the abacus is from Greek historian Herodotus (480-425 BC), who mentioned that the Egyptians had an abacus that manipulated pebbles from left to right, opposite of the direction the Greeks used. Various versions of the abacus surfaced, each with its own way of counting.

For example, the Chinese abacus surfaced in 190 AD, known as the suanpan. This device had more than seven rods, with two beads on each rod in the upper deck and five beads on the bottom deck. In contrast, the ancient Roman abacus was a metal plate with large grooves. The upper grooves had one bead, while the lower ones had four beads. The beads in the upper groove marked the place value of fives. The lower grooves marked the place value from tens to millions.

Over time, counting devices evolved along with technology. In 1622, the modern slide rule was invented, which was a simple calculator used to carry out calculations mechanically. The slide rule was used until 1972, when the Hewlett Packard HP-35 scientific calculator rendered the slide rule needless.

A few decades later, scientific calculators evolved into programmable calculators that could display graphs and images in bitmapped LCD screens.

The abacus is still in use today by shopkeepers in Asia and Chinatowns in North America. Globally, it’s used in elementary schools for teaching the numeral system and arithmetic. In North America, a bead frame (pictured below) similar to the Russian abacus with straight wires and vertical frame is often seen as a plastic or wooden toy. 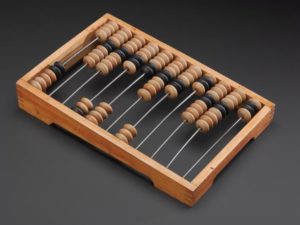 Although blind individuals have access to talking calculators, the abacus is still used to teach simple mathematical concepts to these students in early grades. An abacus gives visually impaired individuals the ability to compute mathematical problems with the speed and accuracy of those using pencil and paper.