A software engineer is a licensed professional engineer who is schooled and skilled in the application of engineering discipline to the creation of software.

Engineering Code of Ethics and License

By U.S. law no person may use the title "engineer" (of any type) unless the person holds a professional engineering license from a state licensing board and is in good standing with the board. A software engineer is also held accountable to a specific code of ethics. 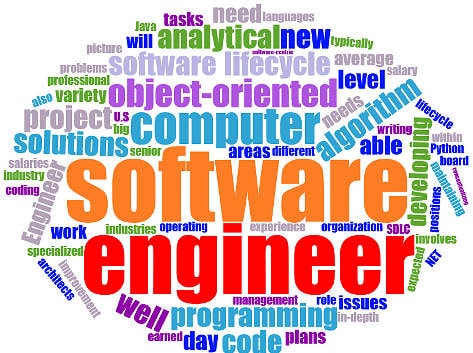 The role of a software engineer, or computer software engineer, is to develop highly functional, solution-based software processes and solutions that address specific needs within an organization or department. These software solutions need to have been thoroughly tested for accuracy and security before implementation, and they need to comply with current coding standards and operating procedures.

Software engineers are tasked with evaluating existing operations within the company, finding and defining problems or areas for improvement, proposing and developing solutions for these issues in the form of new or improved software processes, and testing, implementing, and maintaining these software changes.

This requires in-depth knowledge and experience with the software development lifecycle (SDLC) and the ability to write and explain code created in a variety of languages such as C++, .NET, Java, Python, etc. A software engineer needs to be able to communicate at both a very in-depth, detailed level with computer programmers as well as a broader “big picture” level with IT managers and upper management.

What Does a Software Engineer Do in a Typical Day?

Software engineers are expected to prioritize their tasks while working on several software projects in parallel, and as a result their work day might involve writing or refining software code for one project in the morning before attending or running a meeting to cover the progress on another software project, followed by conceptualizing and developing ideas and requirements for an upcoming project, before finally wrapping up the day by documenting milestones and progress made over the course of the day or week.

Recommended Reading: Webopedia's IT certification resources are designed to help graduates and professionals who want to improve their knowledge and skills in targeted areas of information technology.

How Do You Become a Software Engineer?

A software engineer needs to possess extensive knowledge and fluency in a variety of computer languages such as C++, .NET, Java, and Python, and be able to effectively and efficiently communicate technical knowledge with others in the organization.

A computer software engineer will typically need a Bachelor’s degree (or Master’s) in computer science, math / engineering, or science, and will need to show experience and proficiency in analytical and problem-solving skills, communicating and working well with others, specialized software knowledge, and time management.

Finally, companies will want to see that a software engineer has a proven track record of writing code that is efficient, complies with coding standards, and integrates well with code written by others.

Average Salary for a Software Engineer

According to the U.S. Labor Department, software engineers and software developers earned an average of $100,080 in 2016, or approximately $8,340 per month. Depending on the industry and size of the company, software engineer salaries can typically range from around $50,000 to more than $150,000.

Stay up to date on the latest developments in Internet terminology with a free newsletter from Webopedia. Join to subscribe now.

From A3 to ZZZ we list 1,559 text message and online chat abbreviations to help you translate and understand today's texting lingo. Includes Top... Read More »

Have you heard about a computer certification program but can't figure out if it's right for you? Use this handy list to help you decide. Read More »

The Five Generations of Computers

Learn about each of the five generations of computers and major technology developments that have led to the computing devices that we use... Read More »